Thursday May 3rd, George and Debbie Fox presented United Way of Ventura County a check for $60,900.

When asked how this project came about, Debbie Fox explained, “the Thomas Fires occurred on Monday and by Thursday we decided we had to do something!”.

George and Debbie Fox, owners of Fox Fine Jewelry located at 560 East Main did just that. At first, when they decided to give necklaces to the fire victims, they thought it would be about 150 and “that’s not so many”, George said. But that number quickly jumped to 400 and to date they have given away 601 necklaces! Following the original “Ventura” design, they added an “805” design and then another for Ojai, but when disaster hit Montecito it seemed somehow “inappropriate”, because of the loss of life however, “people asked for them” and they were created too.

According to Debbie, “it was never meant as a fundraiser, but then people wanted to BUY them, and we really weren’t prepared for that!”. She described how difficult the first week was and emphasized that ALL the staff at Fox were part of the project, each working hard on the necklace production and distribution but most of all Debbie said, “we were like grief counselors”, hearing so many heartbreaking stories from those whose lives were changed forever by the fires and floods.

250 necklaces had to be wrapped and ready before Christmas resulting in an assembly line for the Fox family and staff. All three of George and Debbie’s daughters: Niki, Charlotte and Karen joined in and somehow, in all the rush one of the girls confessed she thought she may have wrapped an empty box, the same brave gal offered to stay and unwrap the sea of packages until she found the empty one! It took two full nights to complete, but the operation was a success and many more necklaces followed.

Along with the very generous “gift of compassion”, as Debbie calls the diamond necklaces, the check for $60,900 was received by Eric Harrison, C.E.O. and President for the United Way of Ventura County along with Vicki Raven, the Vice President for Resource Development and Marketing.

The check presentation took place at Fox Fine Jewelry and Eric from United Way stated, “today’s a celebration”. CAPS Media filmed the event and the Fox’s provided large trays of sandwiches from Jimmy’s Slice along with cookies for their guests.

Coincidentally, May 4th was the 26th wedding anniversary for George and Debbie Fox! 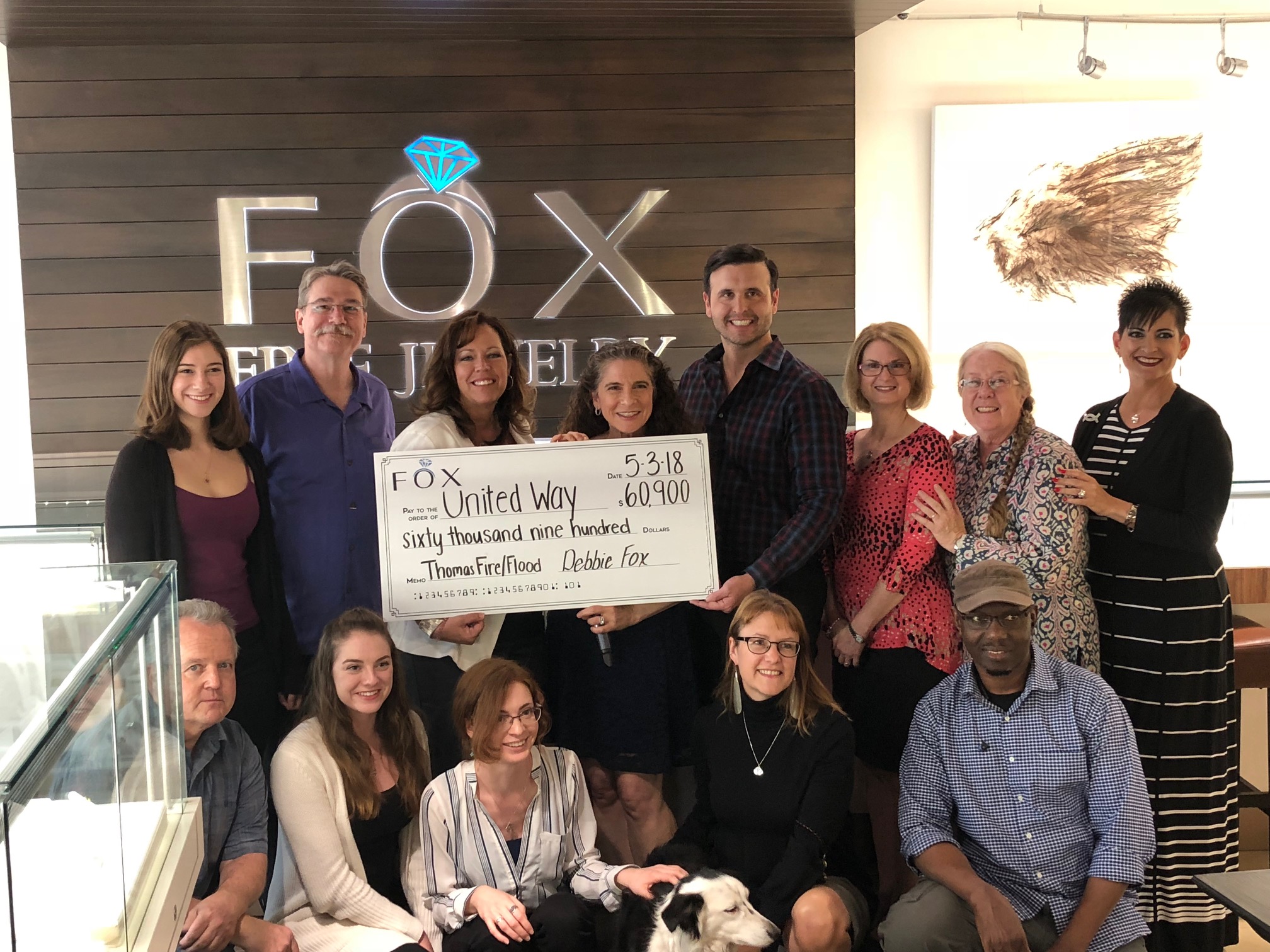 A team of community supporters!

About the Author: admin